For those of us who have come to know and admire the Shakers, the moment when Anthony McGill’s clarinet opened the first discernible strains of Simple Gifts at President Barack Obama’s first inauguration, there was a moment of pleasant recognition. As he was joined by Yo-Yo Ma, Itzhak Perlman, and Gabriela Montero to fill out John Williams’s arrangement of the Shaker song, it was probably all that the audience could do not to sing along: “‘Tis the gift to be simple, ‘tis the gift to be free…”

“Simple Gifts,” written in 1848 by Elder Joseph Bracket at the Shaker community in Alfred, Maine, is among the most recognizable contributions the Shakers made to American popular culture. The song has been heard as a memorable theme in Aaron Copeland’s score for Martha Graham’s ballet, Appalachian Spring, and with a slightly modified tune and new lyrics by Sydney Carter for his song, Lord of the Dance. Carter’s adaptation was then used as a driving force in Michael Flatley’s Lord of the Dance Irish step dancing extravaganza. Simple Gifts has been performed and recorded by Judy Collins, Jewel, and Weezer. It was even sung by the Ingalls family in their little house on the prairie and by a 10-year-old Jodie Foster in an episode of the TV show, Kung-Fu.

In 1959, when CBS Television began using Aaron Copland’s adaptation of Simple Gifts as the introductory theme music for its documentary news series CBS Reports, they were probably unaware of the network’s prior history with the Shakers. In the decade before, the number of homes with televisions skyrocketed. As television was on the brink of becoming more popular than radio, broadcast networks were under increased pressure to supply new shows and to brand themselves visually as they had done in radio with voice and music. The story of branding CBS Television was the Shakers’ first “appearance” on this new media.

William Golden began working at CBS in 1937 in the promotion department. Within three years, based on his earlier work in the art department at House & Garden magazine and a good relationship with Frank Stanton, then head of CBS’s research, he was promoted to the company’s creative director. In 1950, in response to the need for more effective graphic images for television, Golden was asked to develop a new logo. The story of how Golden developed the now universally known CBS “eye” logo is a little muddled with extraneous recollections from some of his co-workers about the stimulus Golden received from “hex signs” on Pennsylvania German barns. However, the path to his idea for the logo leads back to a Shaker gift drawing. 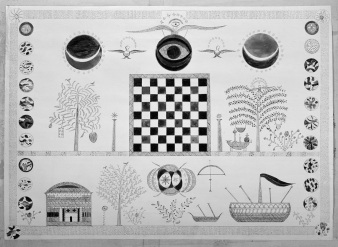 Shaker gift drawings are works on paper made from the early 1840s to the late 1850s that graphically record spiritual visions, or to the Shakers, spiritual “gifts.” These inspired drawings were created by a number of untrained artists and have become an important part of American folk art. Fewer than two hundred of these drawings survive. A number of them were included in the 1935 exhibition, “Shaker Handicrafts,” at the Whitney Museum of American Art and, ten years later, were presented in an article in The Magazine Antiques titled, “Shaker Inspirational Drawings.” By 1950, artists and designers in New York City were well aware of these unique Shaker drawings.

The All-Seeing Eye from Portfolio Magazine as It Was Printed, Portfolio, Volume 1, Number 1, Winter, 1950.

Around the same time William Golden began his quest to develop a new CBS logo, Alexey Brodovitch, famous as the art director of Harper’s Bazaar, took on a new project – the publication of a magazine dedicated totally to graphic design. The magazine, Portfolio, was published without advertising, supported only by the subscriptions of those with a love for graphic design. Although Portfolio lasted only three issues, it achieved a reputation as the most significant publication on design during the twentieth century. The first issue of the magazine included an article titled, “The Gift to be Simple,” (incidentally, part of the first line of the Shaker song, Simple Gifts) that featured a drawing, untitled and undated, attributed by style and choice of symbols to Sister Sarah Bates of the Mount Lebanon Shaker Community (now in the Philadelphia Museum of Art collection). It is a detail of the “all-seeing eye” selected by Brodovitch from the upper center of the drawing that caught Golden’s attention. Luckily for Golden, Brodovitch chose to reproduce the eye from a black and white negative and printed it as a high-contrast image, accentuating the difference between the iris and the pupil. Golden, seeing the potential in the image, handed off the concept for the eye logo to Kurt Weihs, who was able to refine the drawing for its intended use. Weihs was the one who appears most clearly to remember the connection between the CBS Eye and the Shaker drawing in Portfolio magazine. The missing link in the story is how Alexey Brodovitch came to do an article about Shaker gift drawings in the premiere issue of Portfolio.

Sister R. Mildred Barker, from the Shaker community at Sabbathday Lake, Maine in making a point about the real significance of the Shakers in the world, said she did not “want to be remembered as a chair.” Shaker genius, however, expressed itself in many forms – design, invention, social justice, theology, and even the simple chair. The story of the development of the CBS Eye is one example of how the Shakers unintentionally inspired creative impulses in the outside world. In this case, Shakers experienced a spiritual vision. The vision was recorded by a scribe who created a tangible symbol of the all-seeing eye of God held aloft by the wings of an angel. The creative director for CBS used that inspiration to create an image in which the television network makes a case that it is an “eye” that will always be “looking at the world.”